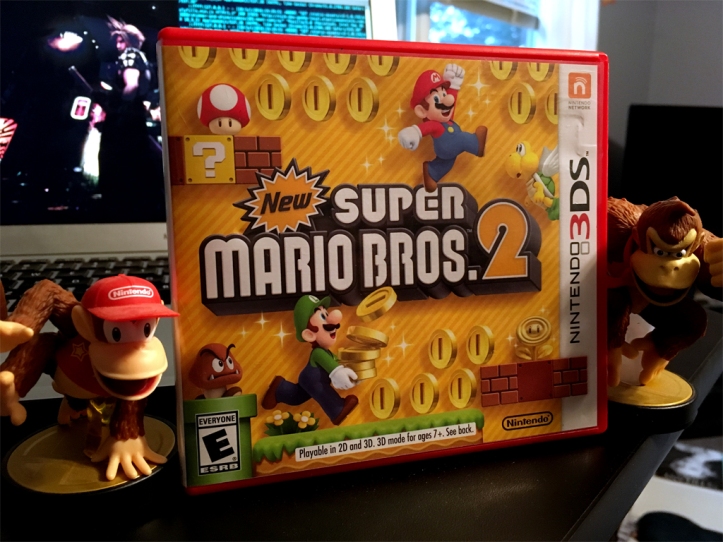 I was a big fan of the first installment of New Super Mario Bros. It was a nice, welcome change to the franchise that felt very fresh, on all fronts. From the upbeat music to the updated happy factor in the game, I enjoyed it and have replayed it several times to completion.

While re-organizing my Wall o’ Gaming, I saw the game box and thought back to years ago, where I played it before class. Amazon must have some kind of voodoo-mind-reading technology these days because I’ll be damned if that very evening, New Super Mario Bros. 2 showed up as a “Recommend Item” on Facebook. They’ve got my number, you guys.

I sniped an eBay auction and nabbed a used copy for $16.50, and here we are! I haven’t gotten very far in it yet, but I’m already in love. Definitely borrowed most if not at all from the first installment, add in some upgraded graphics on a bigger screen, and I call this one a perfect callback to the old Mario platforming days, with plenty of nods back to its predecessor.

I do notice that I’m a little.. out-of-practice, for lack of a better word, at controlling Mario in this game. Sometimes it feels like he’s wearing slippers made of warm cheese and the world is constructed of wet ice. Although I do remember a similar phenomenon when playing the original New installment on the Nintendo DS. Super Mario 3D Land was another game I loved, and that was also an issue initially. Of course, we practice and get better at it.

Also pictured above – I have two new family members to my amiibo family! Of course, they are Donkey and Diddy Kong, nabbed as a pair off of eBay for a whopping $20 with free shipping.

Speaking of which, I feel like the amiibo market is crashing a little bit. I’ve obtained nearly all of my recent dozen or so amiibo via eBay, and I’ve sniped a few auctions and paid less than retail for some of what I considered to be rarer specimens. Specifically, Toon Link, Shulk, and Kirby. Each had for no more than $12. Of course, being that Nintendo hasn’t officially retired any of them means there’s always possibility of re-prints, but let’s not hold our breath either with production most likely shifting to some new releases coming out later this year.

Either way, it’s been a successful eBay week for me – I have work to do and more auctions to snipe. Later!