Let’s Talk Video Game Manuals, and 3 of my Favorites!

Ahh – the video game manual! Never has something so great been accompanied by something even greater.

Steak and potatoes? Yeah, ok, like that ever caught on!

In 2017 it really is a lost art form, sadly. As the game publishers seek to cut costs in every conceivable way and banish the concept of physical games forever, those of us who still have our collections from childhood unknowingly have a veritable treasure trove in our basements, attics, and closets.

Upon digging through my closet and packing my things in the days and nights leading to the purchase of my new home mere months ago, I happened upon a mysterious box that hadn’t been open in quite some time. A slow, dramatic open revealed the presents within: each and every one of my video game manuals since I was a kid. Spanning from the user manual to the original Game Boy, the Super Nintendo set up guide, advertisements from decades past, and everything in between. I have yet to count how many manuals I actually have, but I would wager the number lay somewhere between 100 and 150.

Every once in a while I curse myself and all that I grew up around for not having the foresight to keep all of my boxes, but keeping the manuals practically makes me forget all about those bulky boxes. After all, cracking open the manual was the real treat – once the box was open, what kid was going back into it?

As was most likely the case with anyone who grew up in the wonderful time that was big beautiful colorful video game boxes, each kid had his or her own ritual when receiving a new game. Mine was simple:

It was rare that I’d skip this ceremony – learning everything about each game was the most important step before starting it.

Of course, in 2017, it’s rare that you see these beautiful manuals. It’s a lost art and while some gaming companies insist on keeping things traditional and releasing them for their games, they are certainly in a minority.

I decided to go through a few of my manuals have a bit of a stroll down memory lane. And what a stroll it was! I can be a very sentimental creature, with even the slightest inkling of my childhood sending my concentration off the deep end, and this was no exception. Game Boy, Super Nintendo, Nintendo 64 – each and every manual I glanced over was already cemented into the mental filing cabinet of my brain, and it teleported me right back.

Let’s open that drawer up and take a look at three of my favorites, shall we?

As an aside, I took these with an actual camera instead of the usual iPhone, so clicking each image will bring you to the full resolution image. Mobile users beware, as those files can get rather huge! But on a desktop or Wi-Fi, you’ll be able to read them much better. Enjoy! 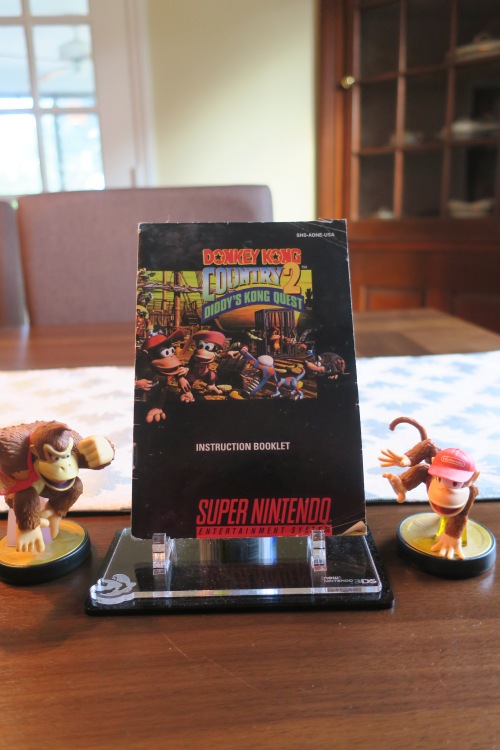 The game franchise that took up most of my gaming time on my first-ever system the Super Nintendo: Donkey Kong! I always thought Diddy’s Kong Quest was the pinnacle of the series, with some of the toughest levels that demanded your unwavering attention and patience. Taking out this game was high up there on the list of accomplishments of a ten-year-old.

Just like the game itself, Rareware was not afraid to go above and beyond with the presentation and the exquisite level of detail. Just look at this page detailing the entirety of Diddy’s move set! Of course, Dixie had her own page as well.

At this section of the manual, it practically went full comic-book while describing each area of the game. You also get a great shot of Cranky Kong in the bottom right, who appears pretty much throughout the entire manual, complaining about something!

As the Donkey Kong Universe is home to all kinds of freaky creatures and bad guys to jump on and roll into, the bulk of the second half of the manual is dedicated to talking about them.

I have the manuals for all three Donkey Kong Country games, but Diddy’s Kong Quest always held a special place for me. The humor was right on point in that installment, and the beautiful manual had all the traits to match.

The Legend of Zelda: Ocarina of Time

While this one might seem obvious given how much of a Zelda fan I am, I added this one because of just how much time I actually spent reading this one.

See, at the time where Ocarina of Time and the Nintendo 64, in general, had taken over all manner of suburbia, it was a huge portion of what young men talked about over many a lunch table. And how could you be on your Ocarina of Time trivia game without your trusty instruction booklet? There were all kinds of goodies in here, but knowing everything about the story and motivations behind the characters were required if you didn’t want to risk looking like you didn’t know something about the most beloved title of 1998. 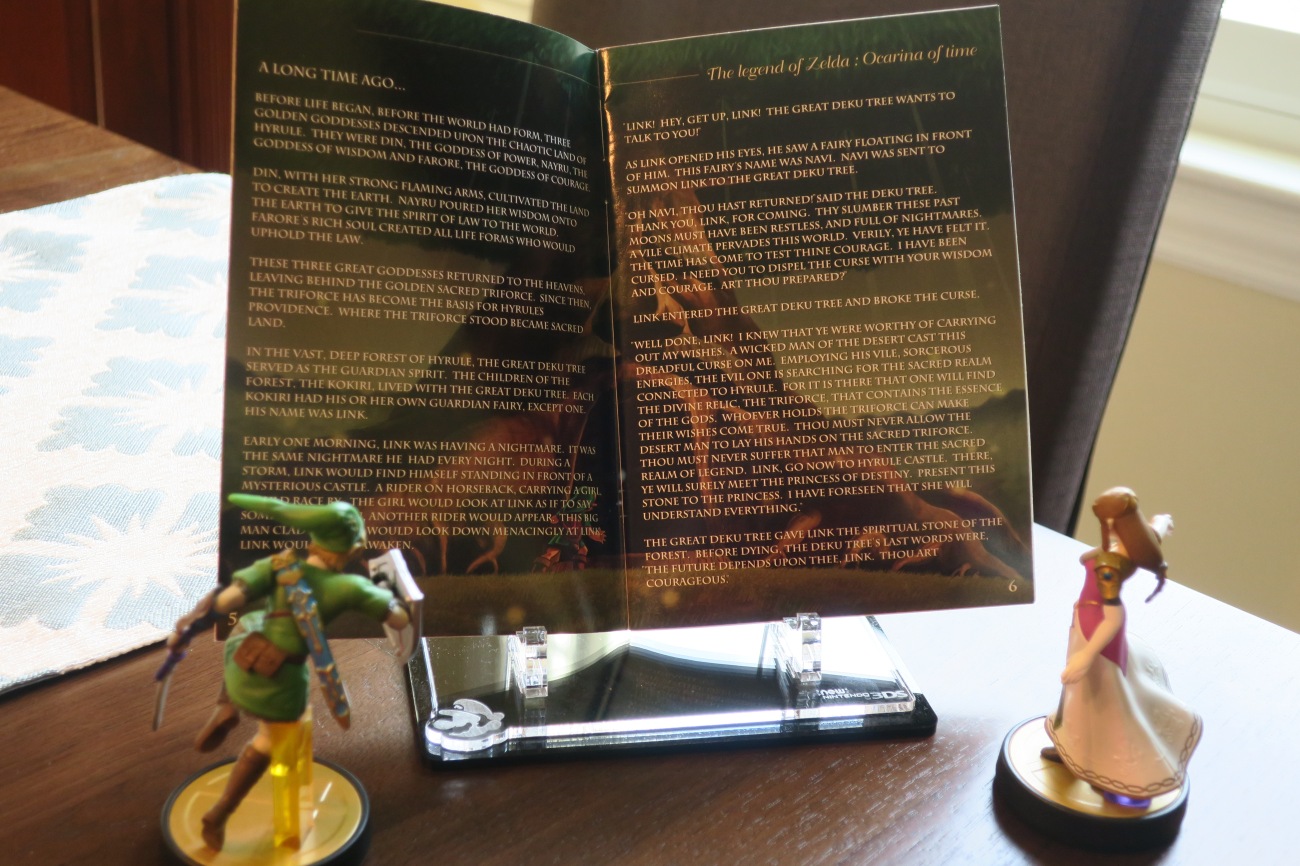 Sometimes even Link and Zelda need to read up on their own Hyrulian history, and luckily the instructional booklet didn’t leave anything up to question! They did a great job cramming everything they possibly could into this manual. Notice the majestic Deku Tree in the background!

I used to love when they would include little “tips” sections in the manuals. Even though 9 out of 10 of them would be obvious and/or totally useless, you’d always find that one thing that you hadn’t quite picked up on yet.

Like a handful of game manuals, Ocarina of Time was one that traveled with me a lot. It got to a point where every single page was hammered straight into my memory. Looking back, it’s no wonder I want to play that game again at even the mere thought of it!

For the last game manual today, I point you to none other than Super Mario World, my first foray into video games when I was five years old.

While it took me literal years to finally beat as a child (although my speed run time is now around 20 minutes!), this game is what really started it all. I have the manual to partially blame and also thank for the obsession. It was just perfect.

Just in case anyone tried to steal it, luckily, I made sure my name and marks were all over it.

To a five-year-old, knowing moves to your favorite video game was paramount to eating and drinking. This handy guide ensured it would be completely impossible to forget anything.

And in case I did forget, luckily I came up with the brilliant idea to mark the tasks that I had remembered.

What exactly is a big red “NO” in the manual supposed to mean? Well, I’m not totally sure, to be honest. If I had to guess, they’d be things that I had done in the game so far. This pattern of marking every last entry in the manual continued for practically the whole thing. 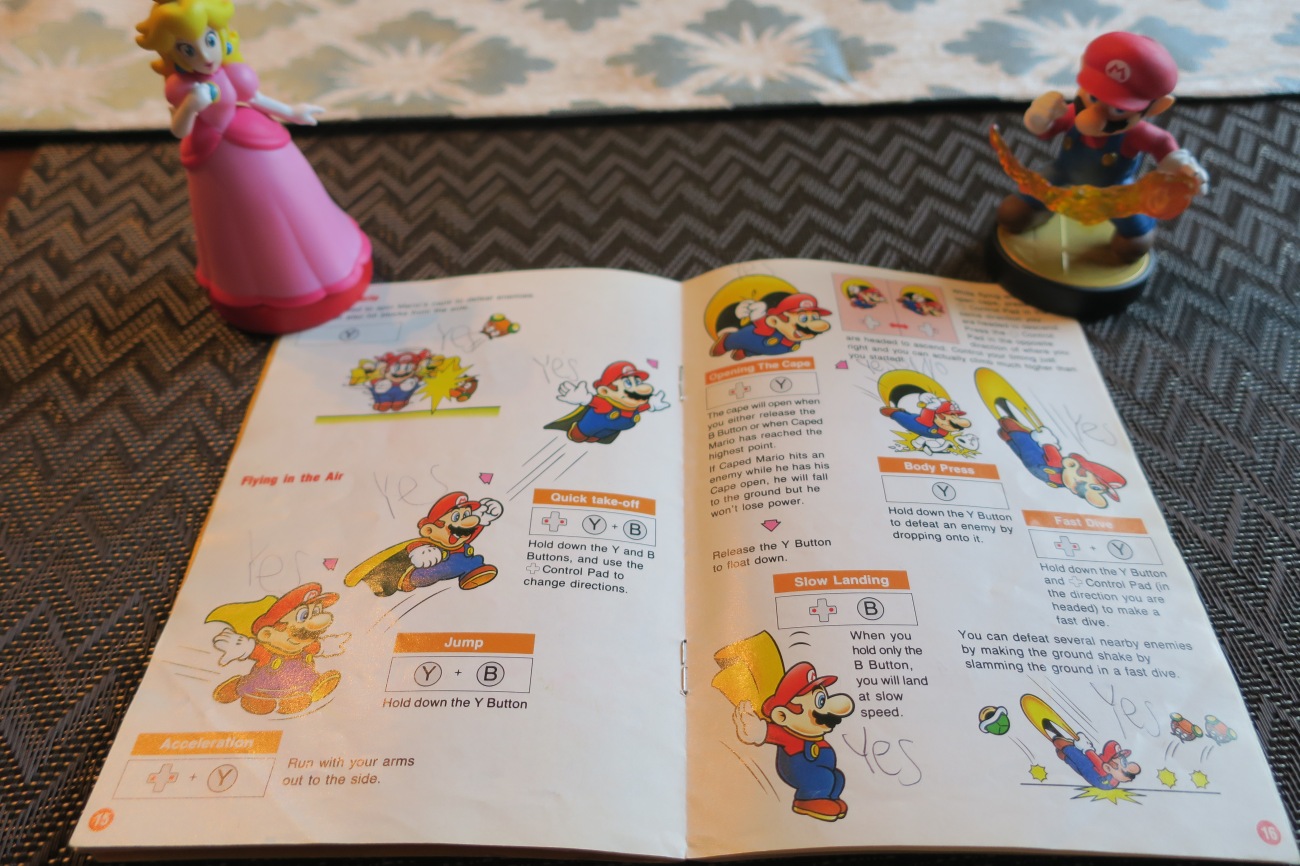 At one point I evidently ran out of red ink, but the point still stood. I had done those things, and for some reason I viewed the instructional manual as a “to do” list. And, boy, I did most of those things.

I did eventually find those rhinos, by the way. If I remember correctly, they were in those awesome, auto-scrolling cave levels where you float on the lava! 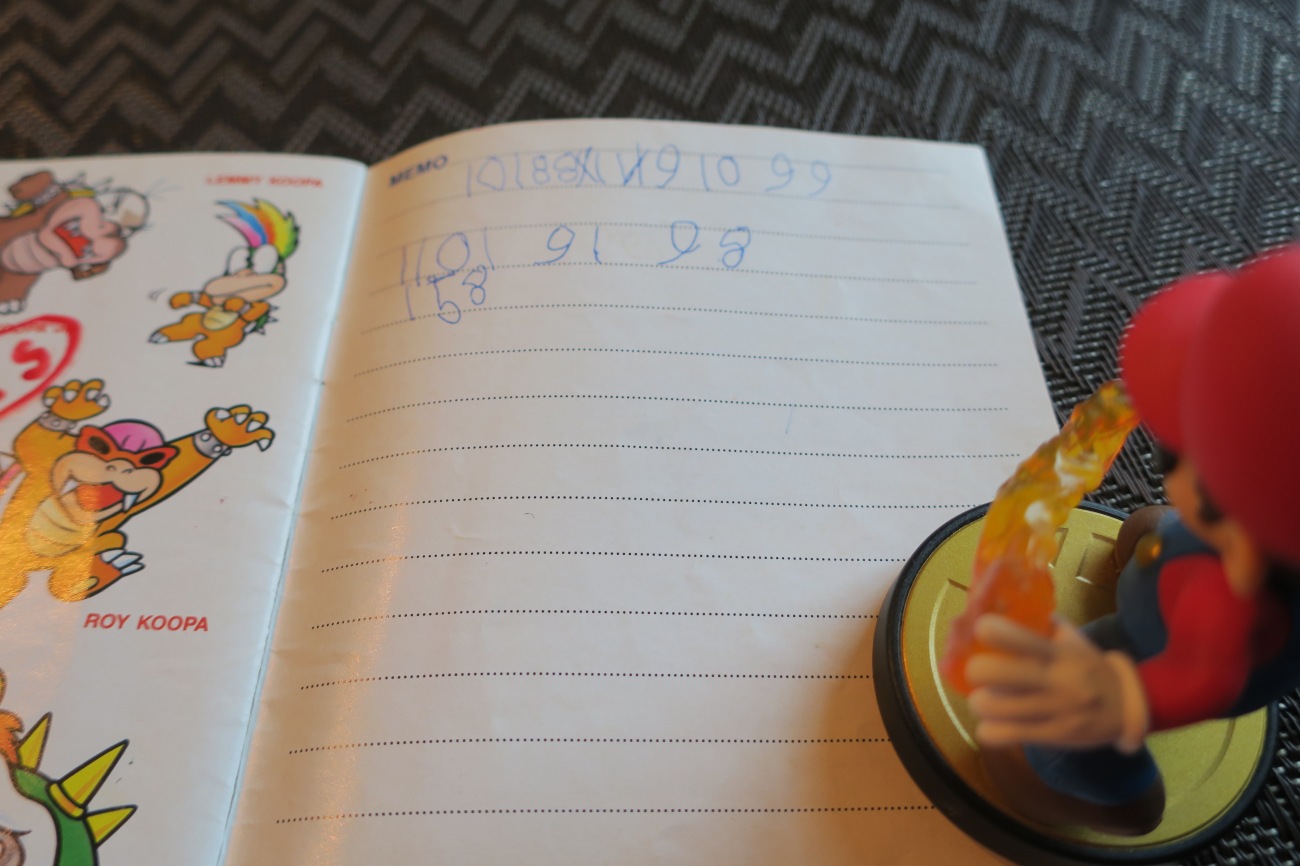 Of course, all of my vital five-year-old thoughts needed to be jotted down. Thanks for the memo section, Nintendo!

What’s your favorite manual? Did you skim them, or spend hours gushing over them before even touching the game? Let me know in the comments. Thanks for reading this incredibly niche post for a demographic of precisely 5 people. Leave a Like and please share if you found this in the slightest bit entertaining!