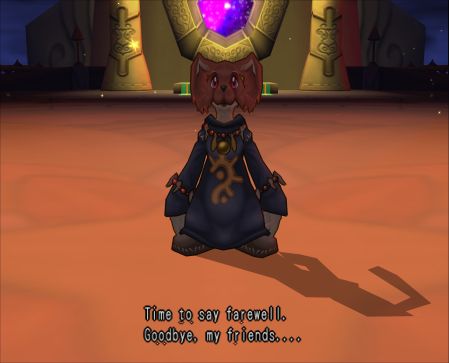 Not unlike a long road trip, something happens close to the end when you’re close to your destination, but somehow the last 25% of the ride takes forever. This is definitely the case of what happened with Dark Cloud 2.

For anyone who hasn’t played this game, there are 7 chapters in total, wherein at the end of the seventh chapter, you fight the final boss. But, alas, after you save and restart, there is the optional Chapter 8. Of course, if I was finally going to beat this game, I wanted to finally beat this game. So I pressed onward and kept hacking away. It took 3 more nights, including having to power level my pistol to its max level, but I did it.

Sometimes when you are done with a game, you should just quit. Unfortunately, I was so close with just having one more chapter of dungeons to burn though, I couldn’t let that slide. Odds are this is the only time I will ever play this game – I wanted to complete all of the chapters, and I’m sure some of you completionists can understand my desire to finish it before moving on to something else.

All of that being said, I actually beat the game about two weeks ago, but wanted to wait until any animosity towards it washed over, so I could write a bit about it with a clear head.

This game was one heck of a journey, and I would like to personally thank the PCSX2 emulator for allowing my to turbo through the slower parts of the game. As a matter of fact, I changed the base clock speed to 114% of the normal 60fps, which really helped with the flow. Anyone else who wants to try this game with this emulator, I recommend doing the same.

The thing about Dark Cloud 2 was that there is just so much content in this game, between meeting all the challenges in each of the many dungeons, beating Spheda (a bonus minigame that’s essentially golf) in each dungeon, getting all of Monica’s monster transformations, so on and so fourth. I’ve read about people playing for over a hundred hours in order to 100% complete everything, and truth be told that doesn’t surprise me. I logged about 60 hours and I just wrapped up the bare minimum.

Moving forward, Dark Cloud 2 was the most story-driven game I’ve played in a long time and I’m happy to say that it definitely sparked something that made me much more likely to a) approach games that have a long play time rating, but more importantly, b) made me more likely to go into longer games blind, not feeling pressured to finish it before I start something else.

Currently I am 7 hours into Kingdom Hearts (which feels strangely similar to Dark Cloud 2 as it just so happens, what with being an action RPG with a lot of the game keybindings), and this game has really jived with me as well. Really, they might as well call it Nostalgic Kick to the Groin because every 10 minutes I’m going oing crazy over a new Disney or Final Fantasy character reveal. Just incredible.

Anyway, here we are. Dark Cloud 2 consumed much of my time the past month and a half, but boy is it over. It’s been a wild ride, thanks for the good times!