I did it. I finally freaken did it. I beat Xenoblade Chronicles. And what a journey it was. 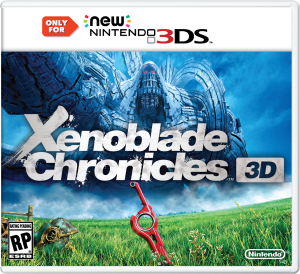 I was telling some of my friends about my finishing of this game, not sure if any of them had ever played it or even heard of it, and I probably sounded like someone who had just graduated college or gotten a new job. It was a huge accomplishment and to understand it, you simply have to play the game. The last time I felt so accomplished at the completion of  a game of this scale, it was Final Fantasy VII, and I beat that a couple of years ago.

There’s not so much that can be said to review this game – the best way to review it is to just tell you everything about the game itself, and then force you to play it at gunpoint – but one to put it is this: if you have ever played an MMORPG that pulled you in to it’s world, one where every mechanic felt perfect and made you want to never stop playing, where minutes turned into hours at an alarming rate – focus on that feeling. That is the feeling you get when you play Xenoblade.

With most JRPGs (of which Xenoblade is one), you have the issue where your biggest and toughest enemy is the endless dialogue and the story itself. The cryptic messages between the nine-hundreth NPC and some other guy you met seventeen hours ago, talking about some nonsense you don’t really care about – none of these things occur in Xenoblade. It never gets in it’s own way. It throws a lot at you at first, but the steep learning curve is made more gradual by the slow addition of playable characters. Had the game started you with several characters and too many options, you’d just about go insane trying to learn the strategy behind each. But this isn’t the case – a lot is thrown at you, but then the world opens up and sets you free.

There are a lot of comparisons between Xenoblade and MMORPGS, but for me, Final Fantasy XIV: A Realm Reborn has to be the closest comparison. Another reason for that is I have only played three MMORPGs, and this is the closest. I’m not only referring to the battle system, which has cooldown-based attacks, buffs/debuffs, location-aware attacks, that sort of thing, but the urge to stop completing tasks and just explore is ever-present in this game. The environments are as diverse as they are beautiful; made even more powerful by the incredible soundtrack that sets the tone as you stumble into a new area.

Going back to the MMORPG comparison, if you’ve ever played one and recognize the traditional roles of healer, DPS, and tank, you will feel right at home when switching around your active team in Xenoblade. Each character has an entirely different moveset, but they are easy to learn, well-balanced, and complement each other perfectly. Certain types of moves work together to make taking down enemies easier, such as chain attacks, toppling enemies, and sending them into a daze, stopping their attacks and opening them to increased critical hits. If you don’t like healing, you may like spamming attacks and generating damage. Or perhaps you like holding aggro. Personally I found healing to be my style the first half of the game, physical-DPS the second, and magic-DPS in the end-game. There’s a gameplay style for everyone, and of course it can be quickly switched at any time you aren’t in battle.

Xenoblade Chronicles is an exercise in what an RPG should be, in this man’s opinion. I recommend everyone who likes immersive, lengthy RPGs to check it out – either on the Wii or the 3DS. They’re both a little harder to find these days, but absolutely worth it. I enjoyed having this adventure in my pocket and I think portability plays a big role in how you enjoy a game – putting yourself in difference places while exploring different environments can have a nice effect on what you get out of a game, or at least that’s been my experience.

While this article was a general retrospective of why I loved the game and what I was thinking when I beat it a few nights ago, I wrote a much longer article about it earlier last year that you might want to check out, if you need more convincing.

Played Xenoblade and loved it? Hated it? Left somewhere in the middle? Leave me a comment and let me know. As always, thanks for reading!