I grew up loving first-person shooters – your Quakes, your Unreal Tournaments, what have you. More recently, Quake Live was a literal blast from the past. Doom 2016 is an incredible callback to the generation of action-packed strafing and murdering everything around you with little to no regard for your own safety. Borderlands and Bioshock were nice breaks from the sluggish-feeling FPSes of the mid-2000s. Left 4 Dead was a silly good time that brought back having fun playing online with strangers for me. One of the major shared traits of these games is the way I played them – on my PC with a mouse and keyboard.

Enter Halo. What some might consider the first massively successful twin-stick shooter. All the way back in 2001 it came out, and in 2001 as well as 2016, I can not play this game on an Xbox. I’ve tried it a few times since then, and finally I was able to get through it – on a PC. Growing up with mouse and keyboard shooters had made me quite partial to the “point-and-click” aspect of this control scheme, and fumbling around with two joysticks just made me feel like an idiot, aka a n00b who took the short bus all the way from noob city. 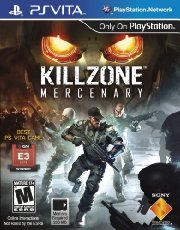 It feels completely counter-intuitive to use a joystick to rotate your player and aim, while moving a mouse by shifting your forearm position feels very natural. You are holding a gun, after all. The response time when you have a mouse can be near-instantaneous, a quick flick of the wrist and you are turned 180 degrees backwards.

It’s mostly because of this reason that I’ve decided to pass on Killzone Mercenary on the PS Vita, though I suppose it’s more giving up then passing. I simply cannot play this game and it’s driven me completely insane. That response time I mentioned earlier is just not possible – and I’ve adjusted the horizontal sensitivity to be turned nearly all the way up. it’s either too high and aiming is inaccurate, or it’s too low and it’s too sluggish.

What makes me frustrated was that Killzone truly feels as if it were designed for a mouse and keyboard, and then ported to the Vita without any concern for the lost response times with joysticks. Countless times I thought to myself, “if I had a mouse and keyboard I could have cleared this whole room already!” I would try sneaking up on an enemy, only to have him turn around and spot me because I was trying to rotate my character to the right angle so I could do a melee takedown. Just writing this is bringing back previously suppressed memories of this nightmare.

Once I was discovered and the whole evil empire presumably alerted to my presence, I was flanked repeatedly, normally while looking down iron sights trying to take out even a single enemy to make life easier. That’s if they decided to be nice and forego chucking a flurry of grenades at me.

Here’s another issue that makes this game un-fun. Looking down sights dramatically slows down your character, and with that slowdown, the action goes out the door. It feels like I’m pausing the action as if to say “…just hold on a sec…” to my enemies, while I line up a laser sight over their head. Meanwhile, I’m dead. This occurs in any game where aiming without your iron sights is completely inaccurate, but it seems even worse here because of the extra time you need to aim while in iron sight mode.

I gave this game a chance given all of the praise it’s received. I figured I could get used to it and learn how to play properly, but all it did is drive me nuts. Long story short, I found myself on eBay today.

It’s extremely rare that I will sell a game, but in this case, it’s enraged me to the point that I don’t ever want to play it again. Contrary to my rantings, it’s done extremely well on the Vita from a critical point of view. Visually, this game is a huge achievement, and I truly wish I could enjoy it for what it is and how it plays, rather than failing at how it controls, because it seems like there’s a great game underneath it all. I’ve come to realize that I’d rather have a small game collection of games I actually like, than a slightly larger one of games I never want to play again. Hopefully someone else can get some enjoyment out of it!

One thought on “Killzone Mercenary: I Can’t Do This Anymore”