For those of you that follow me on Instagram or Twitter, you may know that I had some fun this weekend working on the new office. Specifically, my goal was to turn it from a cardboard jungle into an actual office and game room!

In my old room, I have some track shelving that held a decent chunk of my games and some collectibles, however it was not nearly enough space. I decided to hold off on expanding it, considering the fact that I was in the housing market and when you’re trying to move as soon as possible, improving current living situation isn’t really your top priority.

I’ve wanted a sick game room to hang out and play video games since I was a little kid, and it’s been amazing to finally see it come together.

The room was an off-yellow as we moved in, and this definitely needed to change. I found a nice blue-gray color that looked like it would keep the place looking nice, but not like I work and play in a nursery. Below you can see before and after pictures. 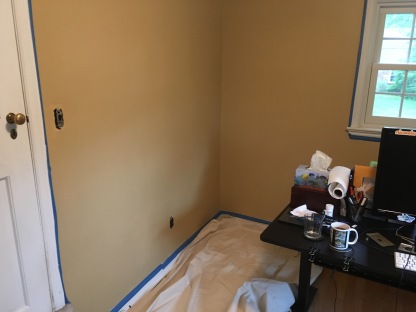 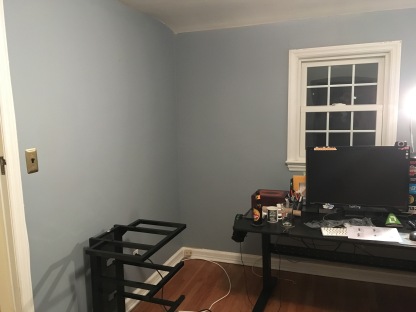 The next thing I needed to get was a sweet television. I wanted the thing to be as huge as possible, and surrounded by games and consoles.

I took some measurements and realized, I couldn’t go more than about a 46″. That was where I hit my first snag: you can’t find 4K TVs in 46″. They simply don’t make them. Perhaps it has to do with pixel ratios but for whatever reason, you can get a 43″ or a 49″. I found an awesome sale and ended up grabbing an amazing looking 49″ LG 4K Smart TV. And boy does it look sweet! 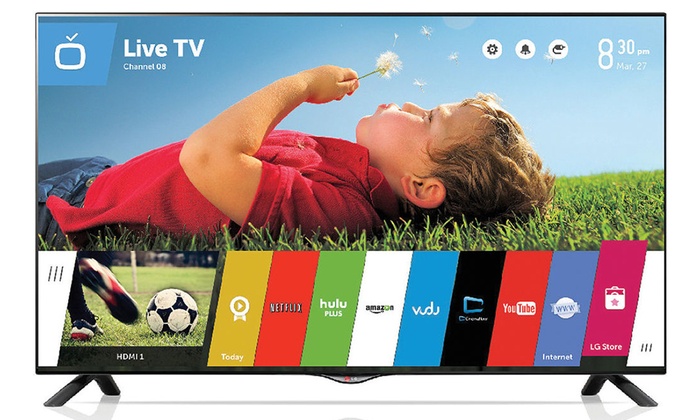 I had the thing mounted about a foot about the top of my TV console, with the wires hidden through the wall. This proved to be a huge pain in the ass due to some lousy horizontal studs in the wall, but it looks very clean. At least after picking up 5 pounds of drywall shrapnel from the mounting project.

Hey! Speaking of the TV console – if you’re anything like me, which you probably are if you’re reading this, you probably have a lot of video game consoles. That’s why I went with the Utiroa TV Stand, complete with wire routing system, and four large glass shelves to showcase all of my machines. 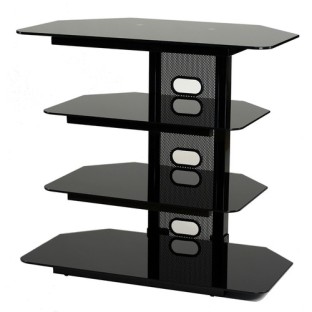 I mentioned the track shelving in my old house – I absolutely loved the look of this setup, as well as the added bonus of being completely customizable, unlike a traditional shelf or organizational unit that you would buy and assemble yourself. Want to change your shelves around? No problem, just remove it and reconstruct. Need to add another shelf? Add two more brackets and you’re good to go! I brought my shelving tracks with me and mounted them directly into the studs.

For the shelves, I went to Home Depot and had them cut me the exact size I needed. 8 shelves in total for the game wall, although technically it will be 16 when they connect to the other side of the corner. I also got some nice wood stain by the name of ‘Kona,’ and some hour and a half later, I had some nicely stained wood shelves! Came out pretty well for an amateur like myself. 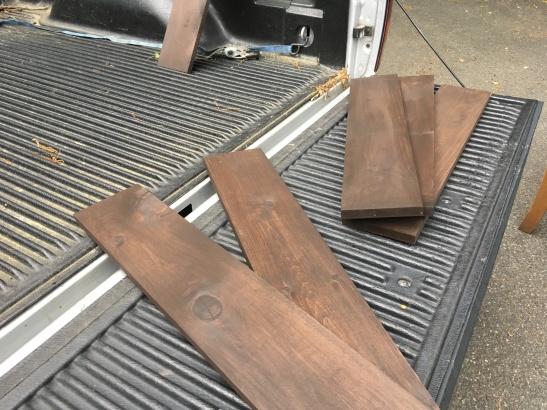 After the longest hour and a half of my life waiting for the stain to dry, while simultaneously scrubbing my hands with the most potent of cleaners (they’re still stained, like a reverse-Michael Jackson sort of thing), I eagerly ran upstairs and set them up.

I spend the next two hours unboxing all of my games and setting up my shelves. This isn’t the final look, as there are still 8 more shelves that are going to the left of it, but this is my progress so far!

It’s been a blast working on the game room – I’ll post another big update when I have more to show! Thanks for reading 🙂