While it’s been a good long time since I did a monthly update, I wanted to drop in and do a quick summary of games I’ve been playing, what I’ve got planned for the foreseeable future, and some quick news!

First of all, I’ve got a special feature that nostalgia’d me pretty hard sitting in the pipeline for Monday morning. It’s goes back to a brief time in gaming circa mid-2008 that came and went too fast. Now, I know what you might be thinking. “But Geddy, 2008 is too recent to get all nostalgic about!” and if I was correct, remember that 2008 is already 9 dreadful years ago. Time flying and all that.

The morning of this writing during my commute, I finally finished Exist Archive! I’ve had only great things to say about it, and barring a few minor performance issues on the Vita, I highly recommended any RPG fans out there with either a PS4 or PSVita check it out. Go on over and read my thoughts on it if you’re interested in a really sweet RPG.

So what else is in the game pipeline?

Well, I’ve been trying my hardest to wrap up Ys: Oath in Felghana. It is a tough little game, I’ve gotta say. Granted, I’m playing it in Hard mode and I’m not sure if when I play the next Ys game, I will stay on Hard or drop down to Normal. The grinding can be a little monotonous and “grind” the fun to a halt, for a period of time. While the satisfaction for finally downing a tough boss is tremendous, sometimes it can creep into the “oh come the hell on” territory. No joke – each boss fight so far has required at least 50 attempts before beating them or leaving to level up, and I consider myself pretty darn good at video games – particularly action-RPGs. Anyway, I’m about 9 hours into it and looking to finish it soon.

Child of Light – Batter Up!

This was the first game I actually got for the Vita, both birthday presents from my awesome fiancée, yet I never finished it as I was pulled away by the allure of many other games.

Isn’t that the worst first world problem to have? Everyone’s experienced that: when you want to play a game, but can’t progress too far because you want to play every other game? That’s typically why I only play 2-3 games at a time.

I’m planning on restarting it later this evening and I’m quite excited to take on a shorter RPG, especially one as gorgeous and polished as this. Exist Archive was nearly 40 hours and while I never actually got burned out, I am definitely looking forward to a change.

Between boss attempts in Ys and level runs through Exist Archive (or now, Child of Light), I’ve been working on 100%ing Mario Kart 8 Deluxe on the Switch. I’m in love with the snappiness and the hand-feel of this installment, and having never played the WiiU version, nor even having paid attention to it’s existence, everything is totally fresh for me.

The last Mario Kart game I played was 7, and even after getting 3 stars in all the 150cc circuits in that game, you had to go back to 100cc and 50cc to do the same. And those modes are slow and terrible, and presumably made for babies.

Overall this game is amazing and is the essential Mario Kart.

Ever Oasis, Cave Story+, and More!

In my head, I have a specific cut-off date for Ys: Oath in Felghana and Child of Light – and that is June 20th, because on that day I’ll be getting Cave Story+ delivered to me, for the Nintendo Switch! I’ll be taking a short break from carrying around my Vita to enjoy this classic that has somehow managed to evade me for years.

Three days later, Ever Oasis will be getting delivered, which I will join with Cave Story+ to be my game rotation. It’ll be nice to take the New 3DS out of retirement! And I gotta tell you – I haven’t been so excited for a game in some time. I’ve gone and done a full media blackout and avoided any and all news about it. I like experiencing games fresh and without the taint of media, so I’ll be going into this one mostly blind. 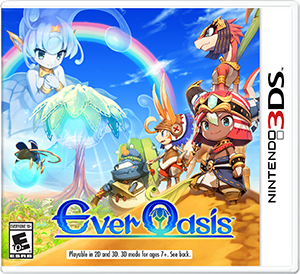 Of course, there’s a month-long lull where I’ll be playing those two games, and eventually Hey Pikmin! will be getting released July 28th. I love Lemmings-esque games and that’s what this one looks to be reminiscent of.

Year of the Vita Backlog

While there are tons of incredible games coming out this year, particularly on our new fancy handheld, courtesy of Nintendo, the ones I’m most looking forward to are Monster Hunter Stories on the 3DS, Super Mario Odyssey, and Xenoblade 2. However, two of those are Christmas-time release dates and beyond, and ‘Stories should be coming out in the fall if I remember correctly.

Between all of that, however, I am going to be going through my Vita backlog a bit and knocking out some of the games. I really amped up the collecting and nabbed about 25 total games, with only about 12 of them being complete. Exist Archive and Child of Light will be two more RPGs out of the way, but I’ve still got God of War 2 from the God of War Collection, and two Ratchet & Clank games to make it through from their respective trilogy. My new commute situation has made it much more possible to clear out backlog games on handhelds, so that’s how I’ve been using the time!

It sounds like a busy year, but I think I’ve hit a good gaming/writing balance so I can make progress and not feel overwhelmed.

Anyway, that’s about it for this messy update. Thanks for reading and stay tuned for Monday!