If you’ve been a long-time visitor of Nostalgia Trigger, this is going to sound very unlike me – but I completely forgot that the SNES Classic Edition came out this past Friday. Let me rephrase – I knew the date that it was being released, but I completely forgot that the calendar had somehow moved to September 29th. Man, wedding stuff messing with my head again! I actually had a day off work on that Friday, and so I headed on over to GameStop on the way to Home Depot. This is where my life is – someone please send help!

I actually waited until after the presumed ambush was over, heading there around 2pm and hoping for an empty store, and that it was. As I already secured an in-store pre-order do to good ol’ fashioned pure dumb luck, I handed over my receipt, paid my balance, and out I was!

My absolute first impression: man, this thing sure is tiny!

On the ride home, I recalled fond memories of the Christmas morning when I was five years old – unwrapping a huge box, its contents unknown, to find this beautiful machine. A brand spankin’ new Super Ninten-wait, what the heck is a Super Nintendo?

True story – when I got my first video game system, I wasn’t even aware of the concept of video games. I was five, after all, had no older siblings, and none of my friends had one. But my mother always knew what to get me, somehow. Seeking out the trends, her and my best friends’ mom would always pool their research, and figure out the coolest Christmas gift of the year, months before the holiday season even began. And that year, it happened to be the Super Nintendo. And here we are today. Thanks mom!

What I most love about the box is how it really stuck to the same style as the original. This was expected of course, as the NES Classic Edition did the same thing, but it still has that beautiful gloss and bulk to it, a trend that was lost years ago as the eco-friendly trend took over for consumer electronics. Not here though – this thing has some strong walls and looks just perfect!

Gracing the front and back covers of the box we have some worthy displays of available games pre-installed! The classics Super Mario World, Donkey Kong Country, Super Mario Kart, and Legend of Zelda: A Link to the Past are some front-side highlights!

Of course, I had already played and beaten all of those numerous times over the years. For a moment I wondered how other people who hadn’t played them yet would feel playing them for the first time in 2017. Then I remembered – I still have a box to open.

I went to town! Here’s a quick clip of the highlights, including the part where I tried holding the phone between my legs and dropped it.

I know that Nintendo manufactured these, but my goodness, the true-to-form controllers are simply perfect. They were the first thing I picked up as a matter of fact, because I can’t remember the last time I’ve held one of these things. It had to have been at least a decade or more!

The buttons themselves have that wonderful snappy feel, just like the ones I still have from my childhood. The console buttons function just as they did on the original Super Nintendo, with the Power button having an On and Off slider position, and the Reset button being spring-loaded. The whole package is really nicely put together and I’m happy to report that the controller wires are of a pretty solid length. 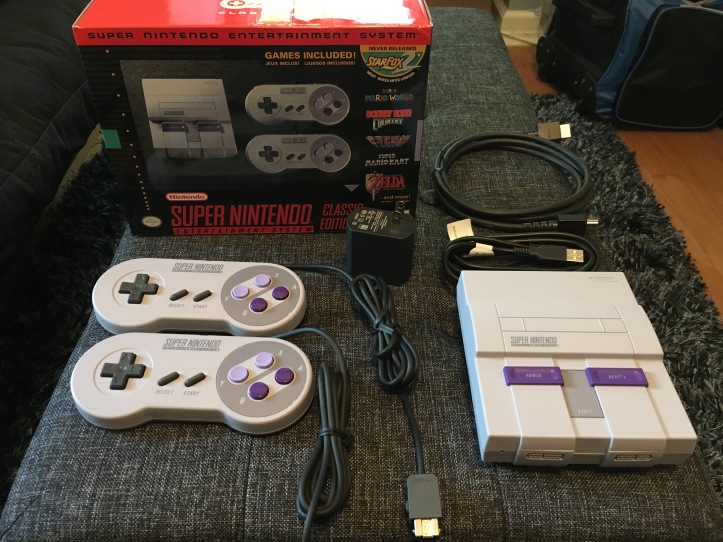 Upon booting up and selecting your language, you’re graced with the gorgeous user interface that is, simply put, a blast from the past. Seeing all of those box arts gliding around, well.. it really puts things into perspective, for one. When you’re a kid, each one of those boxes represented an unfathomable amount of (your parents) money, and an even larger amount of your time spent waiting until Christmas! All so that you could maybe secure two of those titles. Now, we’re skimming through so many incredible hours of entertainment, and back at the beginning of the game marquee in ~20 seconds.

On that note, one of reasons I decided to chase after this thing, aside from the obvious that it was my first console growing up, was because there were a handful of games that I waited for, but never actually got for Christmas. Games like Yoshi’s Island, both Kirby games, Mega Man X, Final Fantasy III – these were all games that I’m not about to buy at the high eBay prices they fetch today. But having them so easily available means I can finally enjoy them in the proper manner, with the right controller. My opinions on emulators haven’t changed, but this all feels so real with the SNES Classic Edition, and so I just had to dive in.

Digital games don’t have a feel to me, no connection – but in this presentation, it all feels so real that I might as well have all of these boxes sitting on my shelf. I don’t know – it’s hard to explain.

But back to the glorious user interface!

One of the coolest things to me is that when you leave the system on and running, but not playing anything, it will turn into “Demo mode,” where it randomly loads up Save States from games you’ve played (or just random games if you haven’t played any) and puts together a demo reel of your past gameplay. It does this by utilizing the Save State Rewind functionality, which if you’ve read up on already, is a very interesting feature by itself.

Speaking of the Save State functionality – while Save State is an incredible feature, particularly for the 8-bit and 16-bit eras where saved-game passcodes and limited lives were all too common, it’s a bit of a pain to use on the SNES Classic Edition. See, the Reset button on the console itself is what knocks you out of the game, and back to the main menu, and it’s there and only there that you can create and resume save states. This makes having the console near you a necessity, but if you’re playing across the room (or more than an arm’s length away, really), it’ll be out of reach for easy access. It’s an interesting decision and I’m not totally sure why they went with this. Having the user hold L+R+Start or something of that nature would have been simple, and save states could have been overlayed. I’ve tried to find the logic in this decision but I’m not totally convinced there is any…

That being said, the games themselves seem to run true to form – lag and all! Starfox was the first game I picked up, and the FPS are just as terribly low as ever before. Feels like being a kid again! Not a complaint, mind you – accurate emulation is important, after all, and getting the same feel as the original Super Nintendo is paramount to just about anything else. Pro Tip: when you hook up your SNES Classic Edition, the first thing you need to do is turn on Game Mode on your TV!

All in all, it was a great purchase that rekindled some pretty amazing feelings. I haven’t played all of the games on here and so I’ll be trying to get a list going of priorities! Stay tuned for me.

Were you able to secure a SNES Classic Edition? Which games are you most excited to play? How do you feel about the console itself and the software it runs? Let’s hear about it in the comments!