I bought this game years ago on a winter Steam sale, and it sat unplayed up until this Christmas break. With my trusty new Steam Link and dual-joystick controller (practically required to play this title), I finally made the effort and finished it in a few days. And I’m really glad I did, and you should pick it up and play it too.

There isn’t much to explain as to the plot of this game – you control two brothers tasked with finding a cure for their dying father. However, the main gimmick of this game is that you do so in a unique way. The left and right thumbsticks control each brother independently, a mindfuck at times, but one that really makes you focus and get sucked into the beautiful atmosphere. 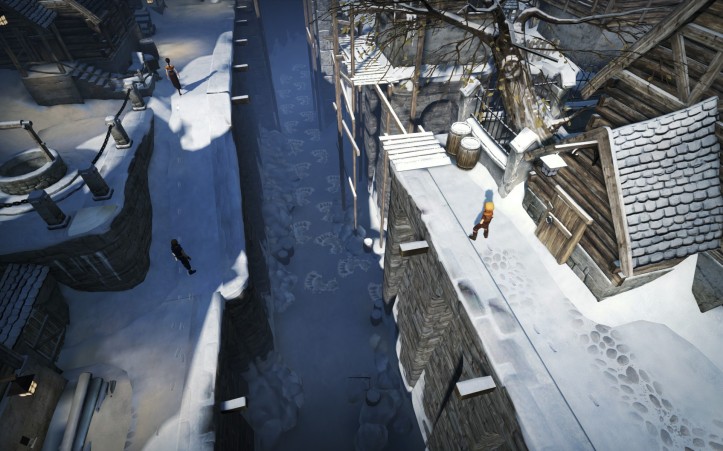 The camera automatically moves around the brothers in an almost-cinematic fashion, showcasing the vivid environment around them as you move them throughout the game world. The soundtrack and ambient sounds complete the picture and set the tone, which goes from optimistic to bleak, helpless to downright sad. Brothers is an entire rainbow of emotions that will make you smile and then completely crush you. If that sounds overly dramatic, you haven’t played this game!

While the dialogue in this game is relatively sparse, it is limited to “Sims”-esque nonsensical gibberish. However, the tonality of the character voices allows the player to hear what they think they should be hearing. For instance, a conversation following a frightening event will contain vocal inflections hinting that the characters are stressed out. A conversation after successfully solving a puzzle has a cadence of victory. While no actual words are spoken, the point gets across to the player, and they are able to fill in the blanks in their own mind.

While a review wouldn’t be unbiased without some cons, I should mention that you need to go into this game expecting an adventure. While initially I thought this would be a puzzle game at its core, most of the puzzles are pretty simplistic, and guiding the brothers through the world overcoming obstacles is the real reward. Don’t expect anything too long or two challenging. I also completed this game in under four hours, so maybe wait for a sale before committing to it – it’s on sale very often.

While I won’t spoiler the ending, Brothers: A Tale of Two Sons proves that you can make a player feel a physical loss on top of an emotional one. It’s a great way to spend a few hours.

Brothers – A Tale of Two Sons on Steam