I’m ashamed. I totally forgot this presentation until the morning of. Holy cow did the holidays fly by! But I’d be lying if I said I wasn’t staring at the YouTube stream in eager anticipation a full half hour early, while my retinas started to burn a little bit, waiting to see the holy grail yet again.

There was something uneasy about seeing a DJ light-show being performed in front of an audience of some of the most stone-faced  Japanese people, mostly men in business suits. It was strange indeed, but maybe that wouldn’t have been the case given the risk being taken with their money. Still, I found it odd and also hilarious how no one was smiling, or even talking amongst themselves. Just staring straight ahead, like they’re in a courtroom waiting for sentencing.

And over all I think this was a pretty good presentation for Nintendo. I’ve tried to be less of a fanboy recently, as I’ve come to realize that the success of the Switch is extremely important. Up in the air are manufacturers building devices which people can bring around with them. Sony has already stated numerous times that they’re backing out of the portable market, and with the end of the 3DS life-cycle looming on the horizon (whether we like it or not), the Switch is positioned to be one of a kind, in a market dominated by and consisting only of itself. 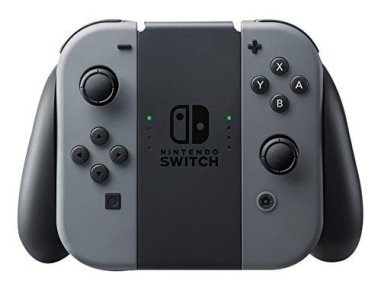 However, if the Switch is a commercial success, this can perhaps influence Sony and Microsoft to innovate along the same line – not by creating independent mobile and home consoles, but by focusing on adding portability to existing consoles. Hey, it happened with cars, right? Why go full electric when it’s easier to crank out more hybrids, am I right? And if you want consumers using your product, don’t you want them using it everywhere? Isn’t this obvious? Your favorite website has a mobile version because guess what, that website wants you using it all the time. So why are portable games any different?

If the Switch fails, Nintendo is in a world of problems, but so are the gamers who like playing on the go. Heck, some people can’t play home consoles. Folks who travel, people with kids who can only play for small periods of time, commuters, some of these groups of people can only or simply want to enjoy their hobby in a portable manner, and seeing these types of systems disappear would be truly catastrophic for those people. The only reason I’m considering the Switch at all is because I can play it wherever; I simply don’t like being confined to a couch. In my late 20s I’ve somehow lost the ability to sit in the same place for more than 30 minutes at a time.

Terrible and repeated “Switch” puns aside, paired with the initial reveal this past October, I think these presentations are a step in the right direction for the company, but the main focus here comes down to games. We need games in a steady release cycle. None of this “release three games before Christmas, then 5 more in 2018.” That isn’t going to cut it at this point – the failure of the WiiU and lack of titles is still fresh in people’s minds, and there’s no better way to build pessimism towards your product than by making people feel robbed.

Speaking of the games, seeing the announcement of Xenoblade 2 just about made my head explode. I’m right on the cusp of finishing the Xenoblade Chronicles and I feel like it was destiny. Completely didn’t see that coming. There’s also Super Mario Odyssey which is the sequel that everyone has wanted for years, Mario Kart which I never got to experience on the WiiU, and of course, Zelda: Breath of the Wild, the collector’s edition of which is officially bringing my cost of entry to the Switch to almost $500. But fuck it, I like it.

Going back to the presentation, most of the time was spent demonstrating the JoyCons, which I think are awesome and will bring back that nostalgic love we had for the Wii when it first released. The software titles 1-2-Switch and the strangely yet appropriately named Arms look like a blast, but the fact that neither are included with the console in the same vein as Wii Sports is a little concerning. Arms looks fun and has some potential, but 1-2-Switch is obviously a party game. And I don’t have a lot of parties, and I don’t foresee a lot of people dropping full price on a game like this.

Then again, what do I know – I think I played Wii Sports with every single person I knew at the time, for about 5 years, as is evident by all the Miis on the system. Seriously, it’s become an ex-girlfriend graveyard in there. Of course, Wii Sports was free with the system, and if they want to move units of Arms and 1-2-Switch, they’re going to need to bundle it soon, or sell it cheaper than the retail full price of $60. I’d love to enjoy these games with friends and my fiancée, but $60 is going to be a little tough to justify on motion games.

While there are some great games in store for the Switch, the success is going to come down to the release stream. How long are we waiting in between major releases? There are also the eShop and virtual releases to consider, but there wasn’t any mention of that feature being ready right out of the gate, which is a little concerning.

With the release date right around the corner on March 3rd, a mere six weeks from now, I’m thinking it’s going to be relatively easy to obtain one. The delayed release gave Nintendo more time to produce, and let’s not forget of course that there isn’t a holiday season to fall back on. I’d be willing to bet that the early adopters are going to be the older crowd by a vast majority. Kids don’t have money and parents aren’t buying consoles for their kids in late February, when the Christmas credit card bill is still lingering.

As one of those relatively older players who plans on buying one on launch day, I’m not particularly concerned with the slower trickle of releases anyway. I have plenty to keep me busy on my 3DS and Vita, both of which have still-sealed games sitting on my shelf waiting to be enjoyed. In fact, I see this as a benefit.

Either way, I look forward to adding the Nintendo Switch to my collection of great portable systems. I definitely missed out on some great games during my Wii-WiiU Nintendo hiatus, and I don’t intend on missing them this round.

Are you planning on buying a Switch? What games are you looking forward to picking up? What is your favorite color? Let me know in the comments below!