I feel like I’ve just woken up from a coma.

It’s a new week, the bleary-eyed Switch early adopters of the world, awakening from their long slumbers, presumably following some long hours in Breath of the Wild. I found myself in that camp, waking up with a deep feeling of dread that usually accompanies the day of my yearly dentist appointment. It wasn’t necessarily going to work that had down, it was just that sub-freezing temperatures outside and a beautiful new piece of hardware sitting next to me, begging me to take the day off and stay right there all day.

I could go on gushing about the Switch, but instead I’d just like to leave some impressions. There are plenty of outlets that can write reviews about every aspect, but this is a personal blog so I’ll keep it short and sweet.

But before that, I have a winner to announce! You may remember a couple of weeks ago I held a giveaway in which contestants could enter the drawing to win a copy of indie game Hue. Well the time to announce that winner has arrived. And that winner is…

That’s right dude – ya won. You were also the only entrant but you still won fair and square! (I actually have no idea how to get this Steam key to you, as I have evidently come down with a terrible case of shortsightedness. I assume you’ll see this at some point though since I tagged you! Can you leave your Twitter username in the comments? I’ll DM you the key!)

Moving along to the second most important topic.. uhm, ah yes! The Nintendo Switch! It’s a pretty amazing piece of hardware. I had this whole big elaborate plan to make an unboxing video for it, but then something struck me. Who the heck watches unboxing videos of consoles? The way I see it, I see three groups of people who would watch a Switch unboxing video:

And would these groups of people watch this video?

Also, when I heard my dog bark and saw a small box outside my front door, I had a minor panic/excitement attack and lost all control of my limbs, and shaky camera work doesn’t do well outside of found-footage films.

Instead of going the unboxing route for reasons detailed above, I snapped a few shots, and using a box cutter, made some strategic slices with surgical precision to extract the majestic goods hiding within. And majestic they were! 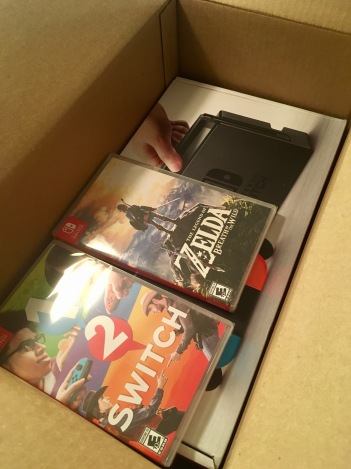 First off, I couldn’t believe how small the box was. I actually got a little nervous at first glance, worrying that it couldn’t possibly be in there. “Maybe they forgot!?” Alas, these worries were all for nothing, as everything looked to be in there when I finally opened it.

I should note that it was a particularly cold day outside March 3rd, sub-freezing at least, and as low temperatures and Lithium-ion batteries don’t mix, I expected the worst in terms of the status of the system charge. Luckily, there was enough juice in there to get the thing turned on and docked.

Right away, this thing is tiny, for a console. Suspected by the small packaging and confirmed by setting up the dock, it was much smaller than I anticipated, which is something that may or may not have been said to me on more than one occasion. Not to say that the screen isn’t a great size for a portable: it absolutely is.

I happen to love the miniaturization style, and while this is typically a Japanese trend, from their tiny apartments with table-bed-couch-drawer-sink-toilet-combo furniture pieces, to their tiny gadget stores, I’m totally cool with it, even as an adult man in the Land of Super-Sizing Everything. Looking at the size of the docked Switch next to literally any other console is pretty funny, especially the WiiU itself. The handheld screen of the WiiU was huge by itself, but it also had a whole other separate part that was massive and cranked out heat like a furnace. The PS4 and Xbox One of course have more processing power so I’ll give them a pass on the size, but it’s not about those two systems: it’s an engineering feat in my opinion that they were able to cram all this power at all into what is essentially a slightly chubbier iPad. But that’s technological advancements for ya!

The Switch itself is a gorgeous system and the screen is crystal clear and boasts beautiful color. Absolutely no complaints there. I’ve read some complaints about screen scratching while removing from the dock, and I don’t know how hard these people are slamming down their consoles, but I haven’t so much has grazed the screen and I’ve docked and undocked my Switch probably dozens of times so far. Careful with your purchase and you’ll be fine, people.

Build quality feels fantastic as well – it feels rugged, not that I’d be volunteering my Switch to test that statement, but it does feel as if it could take a decent drop from above-waist height. What would concern me most is the slide rails along the edge of the JoyCons. Those would most likely be the weak link in the Switch chain, so to speak, and I’m sure Nintendo engineered it that way in the inevitable event of a corner drop. Let’s hope I never have to report on that!

As for the JoyCons, I have above-average sized hands, and initially the JoyCons did feel a little bit small. However it didn’t take long to get used to them, whether they’re attached to the Grip or the console itself. Playing in separate hands is a different story, as they tend to slide all over the place, but this could probably be mitigated by attaching the included JoyCon straps.

The joysticks feel perfect and as crisp as you’d expect and snap back perfectly. Same with the buttons and shoulder clickers. While in handheld mode, this thing feels incredibly light. It’s not much heavier than a first-generation PS Vita, and it feels just as comfortable. The offset joysticks can take some getting used to, but that also depends on the type of game you are playing.

The UI is arguably one of the most important features. I’ve commented before about how Nintendo hasn’t yet figured out user interfaces, particularly on their eShop, as they have all been super sluggish, convoluted train wrecks. I’m so glad to say they have streamlined their whole appearance and made it snappy to boot. The thing flies – loading up the eShop takes about 4 seconds, and that’s while in a game. Can’t complain about anything here. The software even has a Dark Mode theme to make it easier on the eyes. As someone who games at night 90% of the time, that’s great news as I like my retinas in one piece.

On to the battery life, about the time the Internet started complaining about the Switch having less than I don’t know, 380 hours of battery life was about the time I stopped reading any and all articles about the console. I just couldn’t stomach the bitching anymore. The battery life is fine. If you’re a kid with 18 hours of gaming time per day, maybe take this as a lesson that you should go outside more. I was able to play Breath of the Wild for 3 straight hours on full brightness and the battery looked about half dead when I put it back down to charge. You can charge it when you’re playing it. If ~5 hours straight playing with no charge is not enough for you, take a break and go outside once in a while. If you’re on a plane, try to get a seat with an electrical outlet.

God damn, Internet. You charge your 12-inch-and-growing iPhones, your iWatch, your iPad, and your other miscellaneous iFucketyFucks constantly and never complain about that! I really gotta re-install that Chrome plugin that removes comment sections.

What Could Be Better?

To be honest, I’m still basking in the afterglow of a new Nintendo console to come up with a lot of cons with the console itself, so fair warning. A few things I can think of off the top of my head:

These are all fairly minor and I’m sure there are a few more I’ll think of along the next few days, but this is what I got. Overall, I can’t wait to see what Nintendo does with the Switch. The lineup looks very promising and new titles are being announced seemingly all the time. The indie lineup by itself is worth buying the console for in my opinion, but it sure as hell has the foundation for a hugely successful project. I absolutely love how this thing looks on my TV stand and I have been playing the crap out of it. 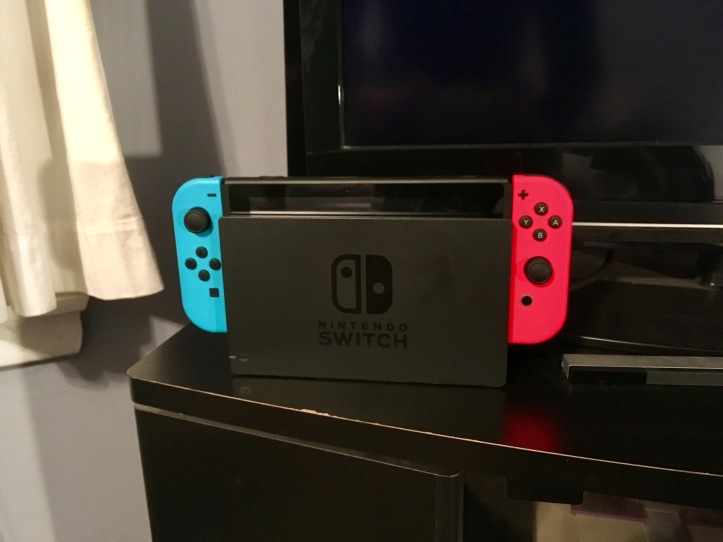