Warning: Some light spoilers ahead but nothing story-centric.

Ahh, Xenoblade Chronicles 2. I’ve already written how I’ve had some trouble getting started. At this point in time, I am about 34 hours into the game – although that is a bit of a guesstimate because the “docked mode save timer bug” struck me bad, adding insult to injury and between 8-10 hours of fake game time, rendering my save file time completely useless. For someone like myself who lives and dies by the in-game playtime clock, this is nothing short of a tragedy. But the show must go on!

I recently finished Chapter 4 and I have.. so many questions. Not anything specific about the story – to be honest, I play Xenoblade primarily for the gameplay, with the bits of story for each quest “bite-sized” portions of storytelling. Consider it like reading chapters in a book, but quickly forgetting the chapters you’ve already read. Maybe that’s blasphemy to some of you, but my attention span has been slowly worn down over the years to that of an aging goldfish, so bear with me.

Today, I want to speak about one thing: Customization. I’ll come right out and say it – there is far too much customization in Xenoblade Chronicles 2.

So many things in this game are customizable that I have become sucked up in a vortex of confusion. As a result, I’m playing it completely unlike the original Xenoblade Chronicles. In that game, and as I mentioned in a love letter-esque post mere days before Xenoblade 2 released, I switched characters constantly, as I loved experimenting with the different play styles. I’d tank with Reyn, then switch it up with Sharla and heal a bit while still ripping damage and Toppling enemies from afar, then go back to Shulk and unleash DPS with the Monado.

Yet, here I am in Xenoblade 2 and I played 99.9% of the time with Rex, the main character. I’m so fixated on trying to figure out the optimal way to battle, that complicating things even further by taking on an entirely new character would just serve to frustrate me more than the rest of the game already has.

Now, the customization in Xenoblade 2 comes in the form of two main options – the playable characters themselves, and the Blades that each of them wields.

Each Blade has a weapon type, and each weapon type has a choice of four different moves. Each of those attacks can be individually leveled up with points earned from using that weapon type. With me so far?

Now – here’s why you can’t really mess around with your Blade setup as much as you’d like to. Simply put, if you aim to follow the battle pattern of Break-Topple-Launch-Smash, there are only so many ways to set that up with capable Blades.

For example, Nia is a healer in the group, and with the Blade I have her set to use, she will always use Break as soon as the battle begins. Great, right!? Using Rex’s main Blade, Pyra, I can then use Topple. But, then there is no way for me to use Launch. I actually cannot figure out how to get these combos working and it’s been 34 hours in this game.

When I press L2 to change my active Blade to anyone but Pyra, I lose that ability to Topple Nia’s Break, since none of Rex’s other Blades have the Topple ability, so using any Blade but Pyra puts me at a huge disadvantage right off the bat, because only select weapon types can Topple. If this sounds confusing, it’s because it doesn’t make sense.

Pyra/Mythra are the only Blades I have for Rex that can Topple, so why would I ever run around with any other Blade?

The illusion that I keep trying to make sense of is that you can customize your characters with Blades, and each Blade has their own attack types and specials. However, not every weapon type can  it goes against what is to me the primary goal of battle – to work with your two other characters in perfect synchronicity to continuously handicap the enemy.

The other issue with trying to maneuver with all of these active Blades is that changing targets is extraordinarily clumsy. In Xenoblade Chronicles 1, you could take on multiple stronger enemies and continuously juggle Break, Topple, and Daze while switching back and forth. This doesn’t seem to be intuitive in Xenoblade 2, and it’s very frustrating.

What about making Geddy cry with this nonsensical Blade system? 😥

Of course, that’s scraping the surface of what I am finding difficult with the battle system. The other part is, as I mentioned, the fact that I never change from Rex – I feel like I’m constantly guessing what my next move should be. It’s never a conscious decision, “I will use a Water attack so that next I can trigger Fire, then Stone, then Fire!” – I just pick something and choose as I go along. Point being, how can I change characters to Nia or the Nopon when I don’t even know how to play as Rex yet? And after 34 hours?

This is a good time to mention that I have yet to bond a new Blade who is classed with Lightning, which is, naturally, the weakness of every enemy I come across.

Let’s talk about Blades. While the “bonding” process in which you roll the dice whilst simultaneously praying to RNJeesus has absolutely no method of scoring rare Blades outside of pure bloody chance, I still managed to snag some decent Blades. Not a lot, mind you, but some. 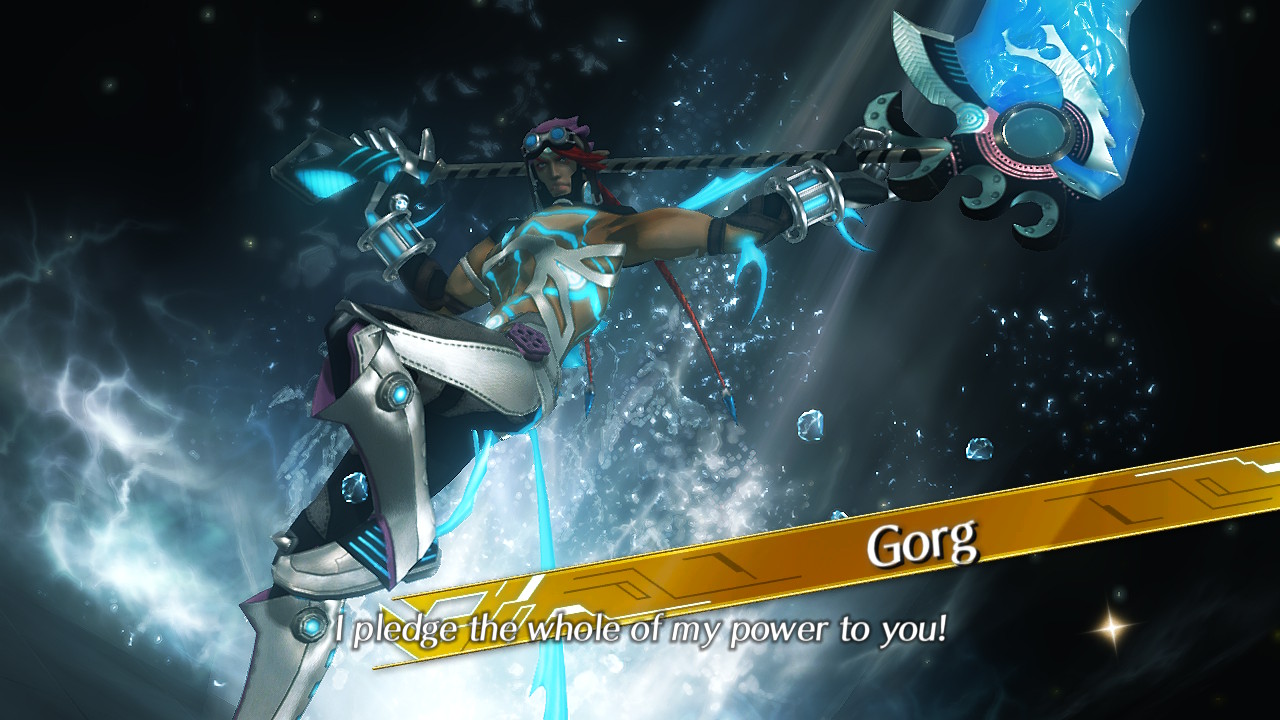 One of the very few times I got a sweet Blade.

Each Blade is classed to be either a Healer, Attacker, or Tank. So here’s a question – I have yet to roll a Healer for Nia, and she is a Healer. What am I officially losing by giving her, say, an Attacker? I have great tank Blades, but I can’t assign them to my Tank! Because the Nopon fellow can only use artificial blades. Well, uh, ok then. Do you see what I’m saying?

Of course, each Blade has about a dozen customization features, of which none do I truly understand the consequences of changing.

By 30 hours in on the original Xenoblade Chronicles, I knew what tweaks to make, what buffs each character needed, what specs were important to whom, who was executing each part of the attack pattern (which was Break, Topple, Daze) – I had mastered the game at this stage. By 50 hours in I had figured out how to play expertly as all seven playable characters, who for the record all played entirely different.

By the time I finished at around 80 hours, I had taken down almost a dozen increasingly difficult bosses, failing dozens of times at each one. But here’s the thing – I knew what I was doing. I was trying different strategies, trying to control different characters to improve the synergy, and finally, I took down each boss one at a time. It was so freaken epic. My heart raced for a week straight when I finally beat it a year ago, almost to the day.

In Xenoblade 2, I have yet to discover any real strategy in combat whatsoever. Sometimes it works, yeah, but I constantly feel as if I need to be in a menu screen, checking on a Blade to see if it leveled up for some arbitrary reason, or upgrading a skill that I didn’t even know I had. Or putting food in a pouch which to this day I have no idea what the hell it’s doing.

I’m not done with this game yet. In fact, I’m determined to master it like I did Xenoblade Chronicles 1. But for now, I’m officially taking a break from Xenoblade 2. It’s been 4 chapters and I have no idea what these cutscenes mean anymore, because it’s hard enough to figure out what I’m doing in gameplay, let alone in story. I just recently got another ability (whoopee) to switch between Pyra and Mythra at will, and I’m not sure I even get what the benefit of that would be, so that’s great I suppose.

That’s it for the rant, folks. Needed to get this off my chest!

Do you have answers to any of these questions? Please send help, right to the comment section below.