Thoughts and Favorites from the Nintendo Direct

Well, it came and went, as Nintendo managed to sneak a mini-direct out ninja-style at some crazy hour of the morning. In fact, when I received word that it had been streamed, I immediately dismissed it as yet another hoax due to the hour it “allegedly” streamed. Didn’t I feel silly when I realized it had actually happened!

So this was a Nintendo Direct “Mini”, wherein Nintendo streams a ~15 minute long reel about upcoming titles for the next couple of months. And this was a pretty solid one, in my opinion. Especially considering it was a “mini.”

The good news comes not necessarily in the form of games that were announced, as a lot of them are ports, but in what it could potentially be announced out in the near future. Let’s check out some highlights!

This was the last reveal in the trailer, yet had absolutely no footage. Really, it’s hard to get excited about a reveal when there’s no actual reveal, but still, it’s great news. This may have leaked before but there’s nothing like an old-fashioned confirmation! Plus, it was one of the first things I hoped for when running down a list of games I desired on the system.

Personally, I’ve never been able to get into Dark Souls as I don’t like playing games that pride themselves in their ability to frustrate the living bejeezus out of me, but I might have to give this one a shot once I wrap up my backlog in presumably a few months. It launches in May and that’s plenty of time for me to debate whether I want to get involved with this, or not.

I’d love to see the rest of the trilogy, also rumored to come to the console, but more importantly, Bloodbourne. We’ll see if From Software can move that one out of Sony exclusivity.

The World Ends With You Re-Release

Here’s one that I couldn’t wait to get my hands on, and I absolutely did not like a single thing about it. The controls made me feel like I had never played video game in my entire life. That being said, this remake of the cult-classic DS game is beloved by many and it admittedly looks gorgeous on the Switch. Can this game jump into my good graces without the dual-screen insanity? Probably not, but it’s great that Square Enix is bringing this one into the modern era of gaming. Secret of Mana is coming out soon on PC, PS4 and Vita, and I hope they continue this trend of making their older games available on modern machines. 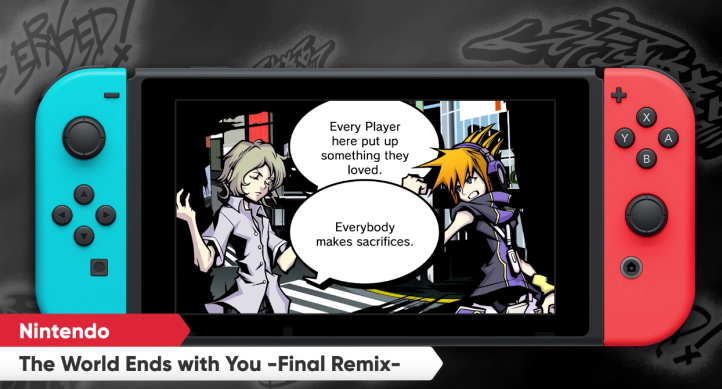 While the game not be one that I’m totally interested in, Square Enix continually moving their arsenal of games to the console is good for everyone, particularly the younger generations that may not have the ability to play the classics.

It may not be a sexy topic, but ports are very important to the Nintendo ecosystem. First of all, the player base for the WiiU was tiny, despite the fact that many of the titles were an absolute blast. I never actually owned a WiiU and never wanted to buy one due to the low number of games I’d end up playing on it, so I rejoice every time I hear about a new port of a first-party title. Secondly, ports are easier for Nintendo to develop than a fresh game, so they print money so that Nintendo can work on other games in the meantime while still getting paid, like  Metroid Prime 4 and the new Pokemon game.

First, we have Donkey Kong Tropical Freeze, which looks like an absolute blast in the same vein as Donkey Kong Country Returns, which I loved on the 3DS. Well, I loved it when I wasn’t cursing all major deities from dying for the 3,000th time in a single level. I always enjoyed Donkey Kong best as a side-scroller and this series did a fantastic job with the level design and the overall atmosphere, and I have yet to see a more gorgeous and detailed looking game on the 3DS.

There’s also Hyrule Warriers: Ultimate Edition, the base game of which is one of the few Zelda spin-off titles I don’t actually own! When it came out on 3DS in 2016 under the name Hyrule Warriors Legends, I was in the midst of playing tons of other games and just didn’t have time to gamble on a Dynasty Warriors game that I had never played before. Truth be told, I’ve played a few demos of this on the in-store kiosks and I could never find much depth beyond smashing buttons. Perhaps a demo will come out on the Switch and I can properly test-drive this one proper! I’d love to be proved wrong and add another fun Zelda game to my collection.

This was a great Direct and this one of the biggest reasons why. The third-party support is really starting to show, and the fact that Ys VIII is coming to console means a lot more than it may lead on.

I mentioned how badly I wanted an Ys game on the system in a post I put out mere days before the Switch launched. Now I may already have this game on the Vita of course, but putting this title front and center in physical form on a brand new platform with hardly any action-RPGs will (hopefully) sell like hot cakes. I said the same thing regarding Xenoblade Chronicles 2 (despite the fact that I’ve had a bit of a, ahem, “checkered” couple of weeks with the game) – more in-depth RPGs is what a console like the Switch needs in its infancy. There’s a huge niche of gamers who will pass on the indies in order to play the heavy-hitting titles.

Not only that, but communicating the message to Japanese developers that we want more JRPGs in the west is a really good thing for a new console. Not only is this important for Nihon Falcom to see, they being the developers of the Ys series, along with other big-name JRPGs of recent like Trails of Cold Steel and Tokyo Xanadu, but also NIS America and other developers/localization houses. There is a whole world out there of great games released in Japan, and tons of them never make it to the west. Hopefully, games like Ys VIII performing well on the Switch will help bring more over.

Of course, the Vita being a distant relative to the Switch, what I’d love to see is more PS4/Switch releases and a gradual tapering off of Vita support in favor of the hot new girlfriend.

I’ve fallen back in love with Kirby as of late – early last year saw the release of Kirby: Planet Robobot, and I had some of the best fun of the year 100% completing it. It even made my top 5 in my Master List article! I had no idea I’d have such a fun time in this game that appears to be for little kids. The colors, the music – the whole thing oozed this perfect childlike wonder and charm, but it’s still a challenging game at its core. Searching the levels for collectible stickers kept me playing for over 25 hours before I beat all the bonus game modes and found everything, which is unbelievable for a 2D platforming game. It really was that good!

Kirby Star Allies, due for release in mid-March, looks to follow this same type of formula, wherein Kirby sucks up bad guys and inherits their abilities. This time around, there seems to be a big focus on jump-in/jump-out co-op play, which allows players to mix and match abilities with their friends. Looking forward to checking this one out, hopefully it can live up to Robobot!

The question I ask is, how important is co-op to the gameplay experience? You may know me well enough to know that I play 99% single-player games, and I’d hate to try to get invested when I can’t experience the game as it was meant to be played. We’ll see over the coming months how this one plays.

Anyway, those are the stand-out announcements for me. In the same way that a television show season needs some “filler” episodes to set the plot up for a later heavy-hitting episode, this “mini” direct actually has a lot more news in it that meets the eye. It set the tone for a massive year for our favorite little hybrid gizmo! I’m hoping that third-parties like From Software and Nihon Falcom keep up the great work in bring their games to Switch.

What did you enjoy most about the Direct? What titles are you most anticipating? Let me know in the comments!